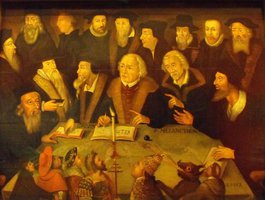 The proposed documentary will document and evaluate the Protestant Reformation, its founders, and its currents through its unique doctrine of the priesthood of all believers (i.e., the idea that all individuals have the ability and responsibility to interpret and teach Scripture). It will retell the history of Protestantism, from its origins to the present day, through this lens, while also examining how this past can help anticipate the future.

Rather than paint the reformers as conceited and confused individuals, who in competition with each other, created conflicts resulting in centuries of confusion, the film will focus on the reformers as flawed men, whose conviction and courage, nevertheless,  brought them into conflict with the Establishment, and led them to finally break from Rome, after being declared heretics and outlaws, even unto the threat of death, and finally, in some cases, death itself.

It will follow the continuous development of the Reformation ideas and the changes these ideas bring forth in societies all over the world through the centuries. It will also discuss the divide among the heirs to the Reformation with regards to its future. Has the Reformation gone too far and one should retreat, possibly even revert to the original status quo?  Or not far enough, and needs to continue?

The film will not shy away from the painful controversies and dissensions of the five hundred years that were tragic but inevitable, because of its insistence on Sola Scriptura and Priesthood of All Believers; and because of which the Protestant Reformation has become the pivotal event to leave an indelible stamp not only on Western civilization but also on the rest of the world, with consequences that are ubiquitous.

Get Connected With Us.

Recommend this page on: